Venezuela's Weak Strongman Chávez does not speak for the South American left.

By: Jaime Daremblum - Hugo Chávez has been busy lately. On July 22, the Venezuelan president arrived in Moscow to finalize a number of bilateral energy and military agreements, including several arms deals that (according to a Russian newspaper) are reportedly worth around $2 billion. (His previous weapons acquisitions from Russia total some $4.5 billion.) On July 31, he announced plans to nationalize the Spanish-owned Bank of Venezuela, his country's third-largest bank. That same day--the last day of an 18-month period during which he could exercise extraordinary powers granted by Congress--Chá vez enacted 26 new laws that expanded considerably his control over the economy, the armed forces, and national elections. A few days later, on August 3, he vowed to "accelerate the socialist revolution" after Venezuela's November elections.Even though he has been embarrassed repeatedly over the past year, Chávez remains brazen and blustery. Flush with oil wealth, he continues to project a powerful image. But in reality, Chávez is rapidly losing influence in Latin America, and he has been for some time now.In a recent New York Times piece, Simon Romero and Alexei Barrionuevo noted that Brazilian President Luiz Inácio Lula da Silva "is discreetly outflanking Mr. Chávez at almost every turn in the struggle for leadership in South America." Indeed, "Venezuela's most pervasive influence remains limited to a handful of the region's poorest nations--Bolivia, Cuba, Dominica, and Nicaragua--members of ALBA, a trade alliance championed by Mr. Chávez. Another Chávez ally, Ecuador, is not a member." (The list of Venezuelan client states should also include Argentina. Chávez has close ties to Néstor and Cristina Kirchner, the former and current president of Argentina, respectively, and the Venezuelan regime has invested billions of dollars in Argentine bonds.)Whereas Chávez has championed radical anti-capitalist policies and sought to move Venezuela backward, Lula has proved to be a pragmatic, market-friendly modernizer. It is the Lula model that has far greater appeal throughout the region.After all, what has Chávez really done for Venezuela? Although the full extent of his mismanagement has been camouflaged by high energy prices (which have been a boon to the oil-rich country), he is wrecking the Venezuelan economy. The healthcare system has deteriorated alarmingly, and food shortages remain a persistent problem. Corruption is widespread, and rampant crime has earned Caracas its reputation as the most dangerous city in the Western Hemisphere.Meanwhile, Chávez has eroded Venezuelan democracy and sought to create an authoritarian governing structure. Last December, his thinly veiled power grab--a proposal to amend the Venezuelan constitution- -was rejected by voters in a national referendum. However, the 26 laws he decreed hurriedly on July 31 introduced many of the measures rejected in that referendum. Chávez has also barred certain opposition candidates from competing in the November elections. In the past week, such antidemocratic behavior has sparked street protests in Caracas.With his "Bolivarian" revolution discredited both at home and abroad, Chávez's desperate hope is that militaristic nationalism will strike a chord. He claims, absurdly, that he is preparing for a U.S. invasion. In fact, his military buildup is intended to consolidate his power and intimidate his neighbors. Chávez also wants to curry favor with the Venezuelan armed forces. (Remember, he was very nearly deposed by a military coup in 2002.)How should the United States respond? What we should not do is engage the Venezuelan populist in a war of words. Instead, we should take practical steps to strengthen relations with Colombia, Brazil, Peru, and other South American democracies. It is utterly shameful that Democratic House leaders have refused to schedule a vote on the U.S.-Colombia free trade deal. How can we treat Colombia so poorly and expect other countries to view us as a credible partner? If U.S. lawmakers understood how their rebuke of Colombia was hurting America's image in the region, one hopes they would reconsider and approve the trade pact immediately. Beyond Colombia, Washington must stay engaged on a range of trade, energy, social, and security issues that affect South America. We must remember that, broadly speaking, the region is moving in a positive direction: Economic growth rates have been strong, living conditions have improved, and democratic institutions have been bolstered. Have many countries elected candidates of the left? Sure. But it should be clear by now that Chávez does not speak for the South American left. In 2003, a center-left Chilean government signed a free trade agreement with the United States. In Brazil, the center-left Lula government has pursued a sound, market-oriented economic agenda and worked with the Bush administration to promote ethanol production. Peru's center-left president, Alan García, has embraced market reforms and free trade. In early 2007, the United States and Uruguay signed a "Trade and Investment Framework Agreement." Uruguay, too, has a center-left government, led by President Tabaré Vázquez. In other words, Chávez is losing the ideological battle, and we should not inflate his stature or the extent of his influence. Thanks to computer files recovered earlier this year by the Colombian military, we have learned more about Venezuelan support for the narco-terrorists of the FARC. These revelations have further damaged Chávez's standing in the region. Now is the time for Washington to boost its own standing in Latin America and deepen cooperation with its democratic partners.
Publicado por Magda Mascioli Garcia No hay comentarios: 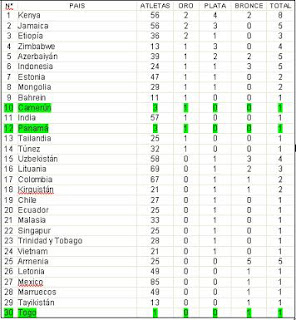 The autocrat of Caracas

THE ECONOMIST - Hugo Chávez tightens the state’s grip on politics and the economy - Hugo Chávez tightens the state’s grip on politics and the economy AFP The man of many companiesFOR much of the past eight months, since suffering defeat in a referendum on changing the constitution, Hugo Chávez has seemed to be on the defensive. Abroad, he repaired strained relations with Colombia’s president and with Spain’s King Juan Carlos. At home, he backpedalled on unpopular measures, such as a new socialist educational curriculum and a draconian intelligence law. He met local businessmen in June and urged them to invest, in the hope that increased production would damp inflation of over 30%. But with Mr Chávez moderation rarely lasts, and he has now veered left again. On July 31st he announced that the government would buy the country’s third-biggest bank, Banco de Venezuela, owned by Spain’s Grupo Santander. Days later, the government published 26 decrees, many of which mimic the constitutional changes rejected in the referendum. Some of them will further tighten the state’s stranglehold on the economy.This has been growing stronger since Mr Chávez won a second six-year term in an election in December 2006. Since then he has taken over the telecoms and electricity companies, as well as other businesses (see table). In June he told the local businessmen that he had no more nationalisations in mind. But Banco de Venezuela was on offer: Santander was reportedly close to completing its sale to a local private bank. The first the bank’s managers knew of Mr Chávez’s intention to purchase was when he announced it on live television during a speech about education. Spain’s government, which had hosted him in Madrid days previously, was also kept in the dark. Bankers have done well from Mr Chávez’s “Bolivarian Revolution”. They have profited by arbitraging exchange controls, and from the government’s penchant for issuing debt (despite its record oil revenues). But banks face increasingly onerous regulations. These set interest rates, and require around half of loans to go at subsidised rates to favoured purposes, such as farmers and housing. Alí Rodríguez, the new finance minister, has ordered banks to cut their holdings of some government paper, on which they are likely to make a loss. On top of all this, growth is slowing. “What is it that Banco Santander is seeing that makes it want to leave Venezuela when it is making so much profit?” asked José Manuel González, the president of the employers’ confederation.Mr Chávez has promised Santander a “friendly” deal. His oil wealth has allowed him to pay for the businesses he takes over, avoiding the friction that would be prompted by expropriation. As proliferating controls make doing business in Venezuela harder, more firms may fall into the government’s lap. “I don’t think this will be the last bank to end up in state hands, and it’s going to be happening in other sectors too,” says Gustavo García of IESA, a business school. The takeover of Banco de Venezuela will make the state the biggest banker in the country. The president wants to turn his new acquisition, which has a big branch network, into a “socialist bank”, which will administer social security and welfare payments. This change of status may not be to the liking of the bank’s workers. The government often obliges state employees to attend political rallies, and regularly sacks those who show signs of political dissent. Some 2m of the 6.5m Venezuelans with formal jobs are now employed by the state. The decrees will further increase the state’s powers, hobble opponents and limit the scope of private enterprise. Because the opposition boycotted the last legislative election, Mr Chávez’s supporters dominate the National Assembly. Nevertheless, after his re-election he obtained the power to pass laws on his own for a period of 18 months. The latest crop of decrees were issued on the day before this power was to expire, in such a rush that their full texts were not published until later. Under one decree a chavista militia will become a new branch of the armed forces. Another tightens state control over food production and distribution, threatening those accused of hoarding with up to ten years in jail. A third makes it easier for the government to take over private companies in general. Another creates powerful new regional officials. They will rival state governors, who are due to be chosen in November in an election in which the opposition hopes to dent Mr Chávez’s near-monopoly of power.Several of these measures violate the constitution of 1999, which Mr Chávez himself sponsored. “Here we have no constitution, no law and the president does exactly what he wants,” Luis Miquilena, a former ally who broke with the president, told the Wall Street Journal. Mr Chávez says anyone who disagrees with the new laws should complain to the supreme court. But the court is beholden to the president. This week it upheld a decision by the auditor-general to ban hundreds of candidates from standing in the state and municipal elections for alleged corruption, even though none has been convicted by the courts. The main apparent target is Leopoldo López, the opposition mayor of Chacao, a district in the capital. Opinion polls had given him a strong chance of being elected as mayor of Caracas. Those polls suggest that a small majority of Venezuelans still support Mr Chávez. But voters showed in the referendum eight months ago that they do not want his autocratic socialism. They may have to show him that once again.
Publicado por Magda Mascioli Garcia No hay comentarios: