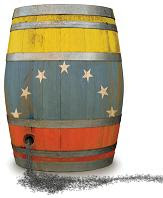 By Mark Shenk - Crude oil fell more than $1 a barrel to the lowest close in five months as the euro accelerated its decline against the dollar, curbing the appeal of commodities as an inflation hedge. Oil has tumbled 6.6 percent so far this week as the euro dropped to the weakest this year against the U.S. currency amid signs that Europe's economy is slowing. Investors looking to hedge against the dollar's decline earlier this year helped lead crude oil, gold, corn and gasoline to records. ``We are continuing to see investors exit the commodity trade as a result of the dollar's strength and a flight to quality in treasuries,' ' said John Kilduff, senior vice president of risk management at MF Global Inc. in New York. ``Also, demand is terrible because of the weak economy.'' Crude oil for October delivery fell $1.46, or 1.3 percent, to settle at $107.89 a barrel at 2:47 p.m. on the New York Mercantile Exchange, the lowest close since April 4. Prices, which are up 44 percent from a year ago, are down 27 percent from the record $147.27 reached July 11. Oil traded at $108.30 a barrel before release of a U.S. Energy Department report at 11 a.m. in Washington showing an unexpected decline in supplies. The euro fell to $1.4334 against the U.S. dollar from $1.4498 yesterday. It touched $1.432, the lowest since Dec. 21. The European currency has dropped for six straight days. German factory orders unexpectedly fell in July, extending their longest-ever declining streak and increasing the likelihood that Europe's largest economy is heading for a recession. Reports yesterday showed consumer spending, company investment and exports fell in the second quarter, dragging the European economy into a 0.2 percent contraction. `Not Good' - Luxembourg Finance Minister Jean-Claude Juncker, who chairs a group of counterparts from the euro-area, said the region's economic situation is ``not good'' and the European Union will cut its growth forecasts this month. The European Commission's 2008 gross domestic product forecast will be cut to as low as 1 percent when it publishes new predictions next week, Juncker told reporters in Luxembourg today. It previously forecast growth of 1.7 percent. Crude-oil stockpiles fell 1.9 million barrels to 303.9 million barrels in the week ended Aug. 29, the department said in its weekly report. Analysts surveyed by Bloomberg News were split over whether the report would show an increase or drop. Platforms in the Gulf and refineries in coastal areas shut as Hurricane Gustav approached Louisiana. `Grain of Salt' - ``It's rather telling that the market can't go higher on this bullish report,'' said Brad Samples, a commodity analyst for Summit Energy Inc. in Louisville, Kentucky. ``Traders are taking the numbers with an appropriate grain of salt. Tropical storms impact the arrivals of tankers and refinery activity.'' Prices fell as low as $105.46 on Sept. 2, the lowest since April, after Hurricane Gustav, the most powerful storm since Katrina and Rita in 2005, caused little damage to Gulf of Mexico production. The Gulf is responsible for more than one-fifth of U.S. oil production. The Organization of Petroleum Exporting Countries, the supplier of 40 percent of the world's oil, will probably keep producing at a record pace. The 13-nation group will reject calls from Venezuela and Iran to trim supplies at its Sept. 9 meeting in Vienna, according to 29 of the 32 energy analysts surveyed by Bloomberg News. OPEC Quotas - The OPEC members with quotas produced about 592,000 barrels a day more than their official limit of 29.673 million last month, according to Bloomberg estimates. Iraq has no quota. All the countries except Saudi Arabia are pumping at close to capacity to meet rising demand and compensate for declining supplies from Nigeria, Iran and Venezuela. BP Plc and its billionaire partners in TNK-BP, Russia's third-largest oil company, agreed to oust the chief executive officer and expand the board to resolve an eight-month dispute that threatened the British company's future in the country. Brent crude oil for October settlement fell $1.76, or 1.6 percent, to settle at $106.30 a barrel on London's ICE Futures Europe exchange.
Publicado por Magda Mascioli Garcia