The Time Clock Has Run Out: Israel Ready to Strike Iran 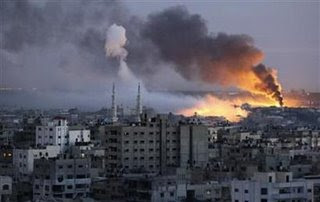 By: Jim Meyers - Informed sources in Washington tell Newsmax that Israel indeed will launch a strike against Iran ’s nuclear facilities soon – possibly in just days as President George W. Bush prepares to leave office. The reason: The time clock has begun to run out. Iran is close to acquiring a nuclear device under the control of its radical president, Mahmoud Ahmadinejad. International Atomic Energy Agency Director General Mohamed ElBaradei said in June that Iran would have a nuclear weapon in as little as six months. That six-month period has passed. Reports of Israel’s decision to imminently launch strikes, although unconfirmed, would seem to contradict the Bush stance outlined in a front-page New York Times story last week, which asserted that Bush rejected a plea from Israel last year to help it raid Iran’s main nuclear complex. The Times said Israel was rebuffed after it requested from the U.S. specialized bunker-busting bombs that it needs to attack Iran ’s nuclear complex at Natanz. The U.S. also reportedly nixed permission to the Israeli warplanes to fly over Iraqi territory to reach Iran . Israel ’s requests to the U.S. for military assistance came as the Jewish state was reportedly angry over a U.S. intelligence assessment in late 2007 that concluded Iran had effectively suspended its development of nuclear weapons. But an investigative report circulated by IAEA chief ElBaradei late last year disclosed that Iran was continuing to carry out uranium enrichment and had already established 6,000 centrifuges for enriching uranium, of which 3,800 were then in operation. American intelligence officials now estimate that the figure is 4,000 to 5,000 centrifuges, enough to produce about one weapon’s worth of uranium every eight months or so, according to the Times. The IAEA report estimated that Iran has obtained two tons of enriched uranium since its enrichment program was restarted at Natanz two years ago. Last year 100 Israeli jets took part in an exercise over the eastern Mediterranean that was interpreted as a dress rehearsal for a possible attack on Iran . And on Sept. 6 Israel launched an air attack against a site in Syria believed to be a nuclear-related facility containing material delivered by North Korea. Former U.S. Ambassador to the United Nations John Bolton predicted that Israel would stage a raid against Iran 's nuclear facilities if Barack Obama won the presidential election. Bolton stated that he believed the Israeli attack would take place sometime between the day after Obama's win and his inauguration on January 20. In an interview with FOX News, Bolton reasoned that Israel wouldn’t be able to hold off a strike on Iran any longer than that given Obama’s more conciliatory approach to Iran . The Israeli government “would have to make a judgment whether to [strike] during the remainder of President Bush’s term in office or wait for his successor,” Bolton added. William Perry, U.S. Secretary of Defense under President Bill Clinton, said that Obama would face a major crisis in his first few months in office over Iran ’s nuclear weapons program. Perry, speaking at a foreign policy conference on Jan. 8, said that Iran is "moving inexorably toward becoming a nuclear power" and “it seems clear that Israel will not sit by idle while Iran takes the final steps toward becoming a nuclear power." And former CIA officer Robert Baer, author of the new book “The Devil We Know: Dealing with the New Iranian Superpower,” told Newsmax in October that Iran was at that time probably months, if not weeks, away from war with Israel . The repercussions of an Israeli attack are not clear. Though Arab states remain openly hostile to Israel , many who belong to the Sunni branch of Islam fear the rise of a nuclear Iran , a nation dominated by Shiite imams. Gulf states like Bahrain , Saudi Arabia and Kuwait have been quietly pressing the U.S. to take action against Iran – and may secretly root for an Israeli attack. But Iran , even without nuclear weapons, is a regional power. If attacked, they are likely to press proxy terror groups like Hamas and Hezbollah to launch offensives against Israel and possibly the U.S. Iran has warned in the past that it would launch a “missile blitz” against Gulf states if it is attacked. And last July a senior Iranian official said the Islamic Republic would destroy Israel and 32 U.S. military bases in the Middle East if Iran is attacked over its nuclear program. “Israel and 32 U.S. military bases in the region would not be out of the reach of our missiles and would be destroyed," the semi-official Fars News Agency quoted Mojtaba Zolnour as saying in a speech. Zolnour is the deputy of Supreme Leader Ayatollah Ali Khamenei's representative in Iran 's elite Revolutionary Guards. Even more ominously, Iran has reportedly carried out missile tests for what could be a plan for a nuclear strike on the U.S. © 2009 Newsmax. All rights reserved.
Publicado por Magda Mascioli Garcia