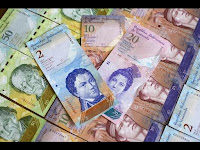 By Matthew Walter and Lester Pimentel - Venezuela’s bolivar sank to a 16- month low on speculation President Hugo Chavez will devalue the official exchange rate for the first time in four years to narrow a budget gap that swelled as oil prices declined. The bolivar fell 1.9 percent to 6.43 per dollar in unregulated trading at 12:25 p.m. New York time, said Nelson Corrie, head trader at Interacciones Casa de Bolsa in Caracas. Chavez said yesterday that he’ll announce economic measures this weekend in response to the tumble in oil, the source of more than 90 percent of the South American country’s exports. “The market is very nervous,” Corrie said in a telephone interview. “People are demanding dollars. Everyone is buying because they’re not sure what Chavez is going to announce tomorrow.” The currency is down 14 percent this year in the parallel market, where Venezuelans turn when they can’t get government authorization to buy dollars at the official rate of 2.15. Goldman Sachs Group Inc. economist Alberto Ramos said today the government may devalue the official rate to 2.70 per dollar to help ease an “emerging fiscal crunch.” “It is possible that the measures will include a long- delayed” devaluation, Ramos wrote in a note to investors. “In order to close the emerging fiscal gap, the government will soon have to constrain the growth rate of spending and likely also devalue.” Budget Deficit - Venezuela’s budget deficit could widen to the equivalent of at least 5 percent of gross domestic product this year, Ramos said. A devaluation would help narrow the deficit by generating more bolivars for each dollar of oil revenue the government receives. Crude, which has fallen 65 percent from a July record, accounts for about half of Venezuelan government revenue. Chavez, who first implemented currency restrictions amid a nationwide oil strike in 2003, braced Venezuelans yesterday for the economic measures he’ll announce. “I want to insist that our people, our country, that we all assume the magnitude of the crisis and its impact on Venezuela,” Chavez said on state television. He didn’t provide specifics on what the measures would be. Finance Minister Ali Rodriguez said as recently as March 8 that the government doesn’t plan to devalue the official exchange rate because it would drive up consumer prices. Venezuela already has the highest inflation rate in Latin America, 29.5 percent. Nationalizations - The bolivar may also be weakening after Chavez said yesterday he plans to follow through with the nationalization of Banco de Venezuela, the country’s third-biggest bank and a unit a Spain’s Banco Santander SA, said Asdrubal Oliveros, a director at Caracas-based consulting firm Ecoanalitica. The drop in oil hasn’t slowed the self-proclaimed socialist leader’s march toward a state-controlled economy. Chavez earlier this month seized a rice plant owned by Cargill Inc., the biggest U.S. agricultural company, and threatened to take over Empresas Polar SA, Venezuela’s biggest private company. Aside from a devaluation, Chavez may also raise the sales tax, reinstate a financial transactions tax and increase subsidized gasoline prices to boost revenue, Oliveros said. An Ecoanalitica Opinion Publica survey in January found that most citizens would prefer that the government cut spending and raise taxes and gas prices before devaluing the currency. Out of 1,200 people surveyed, just 5 percent favored a devaluation, while 66 percent said they would accept spending cuts. The poll had a margin of error of plus or minus 3 percentage points. ‘President’s Discretion’ - It’s completely up to the president’s discretion when he’ll devalue,” Oliveros said. “I don’t think any major adjustments are going to be announced tomorrow. Chavez is going to say less than everyone is expecting.” The president could slow spending and reduce the amount of dollars made available at the official exchange rate without formally announcing any policy changes, he said. Banco Mercantil predicts that government revenue will plunge 66 percent this year, and Morgan Stanley forecasts the economy will contract 4 percent, the first recession since the national strike in 2003. Venezuela’s economy expanded 3.2 percent in the fourth quarter, the slowest pace since 2003. Oil exports plunged 47 percent and the country recorded its first current-account deficit since 2001. Alejandro Grisanti, an economist at Barclays Capital Plc, estimates Venezuela will face a $48 billion budget shortfall this year if it doesn’t devalue the bolivar or raise taxes. Tomorrow’s announcements come just over a month after Chavez won a national referendum on an amendment to the constitution, which will allow him to seek re-election as many times as he likes.
Publicado por Magda Mascioli Garcia