From Petrostate To Narcostate 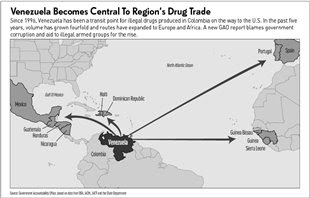 By: John R. Thomson - Hemisphere: A congressional report released last week left little doubt that Venezuela's Hugo Chavez is turning his country into a narcotraffickers' paradise. So why isn't Venezuela an international pariah? A new report released last Monday, "U.S. Counternarcotics Cooperation With Venezuela Has Declined," by the Government Accountability Office, offers the harshest assessment yet about Venezuela's rising role in Latin America's drug trade. The GAO said that state corruption, Chavez's aid to Colombia's FARC guerrillas, and Venezuela's refusal to cooperate with U.S. law enforcement agencies add up to trouble — an outlaw narcostate in the making and trouble for the U.S. on the horizon. "The findings of this report have heightened my concern that Venezuela's failure to cooperate with the United States on drug interdiction is related to corruption in that country's government," said Sen. Richard Lugar, R-Ind., who commissioned the report. No kidding. But instead of taking the natural course of action from such a report and treating Venezuela like a dank, despicable narcostate it deserves to be treated as, the U.S. is going out of its way to make nice with Chavez, restoring diplomatic ties as of July 1, in the mere hopes that dialogue will persuade him to cut it out. That misreads the situation, because what's happening isn't a consequence of weakness — it's a result of will. For one thing, this isn't about a few low-level Venezuelan officials on the take from traffickers. The GAO report says that Venezuela's government corruption is worst at the top. Three top Chavista officials, including a former interior minister and a sitting chief of military intelligence, were named as actual drug "kingpins." The report also warned systematic corruption in Chavez's National Guard, which controls airports and seaports, is the U.S.' biggest worry. That too links to the top. Chavista officials in the past had used oil money to reward cronies and ensure loyalty. As the oil cash dries up, it's being replaced with illegal drug cash. The GAO report cites low-level officials pleading with U.S. investigators for more drug cooperation, but their pleas have been rebuffed by Chavez's men at the top. As a result, cocaine trafficking through Venezuela has surged fourfold over the last five years, along with criminal chaos in Venezuela's streets and countryside. That's a problem for us and every country in the region as the cash and corruption have spread. Already, all the countries in ALBA, Chavez's alliance of ruined democracies, show signs of infection. Bolivia has had its U.S. trading privileges cut off for noncooperation in the drug war. Its coca output is on the rise. Ecuador's President Rafael Correa has just been named on a new FARC tape captured by Colombian police as taking payoffs from the terrorists. Honduras' deposed leader, Mel Zelaya, has been accused by the government that threw him out of having ties with traffickers. It doesn't help that Honduras is a lily pad for traffickers moving contraband from Venezuela to the U.S. Then there's Chavez's own ties to narcoterror. A captured computer from FARC chieftain Raul Reyes in 2008 revealed that Chavez offered FARC $300 million in oil cash, plus safe haven, passports, and medical care. To date, Chavez has suffered no consequences for this aid to drug-dealing terrorists who now control 60% of Colombia's cocaine trade. It's part of a disturbing pattern. Based on the inaction following each new revelation about Chavez's drug involvement, there are never any consequences. In the past, the U.S. cut narcostates off at the knees, fast. In 1994, when the new president of Colombia, Ernesto Samper, was caught on tape taking cash from the Cali Cartel, the U.S. ended aid and treated him as a pariah. When Panamanian strongman Manuel Noriega cut a money-laundering deal with the Medellin Cartel in 1989, the U.S. sent in the Marines. That's what makes this unwillingness to confront Chavez so strange. If nothing is done, we'll pay for it. The U.S. will set up three to five de facto military bases in Colombia in coming years, largely to fight the cocaine trade Chavez fuels. It's not a sign of confidence. It's a hunkering down for war based on ineffective policy. It would be far better to quit pretending Chavez is a small "d" democrat who can be negotiated with, and take stronger action now. This would sure beat a war. But it has to start with a reality check about Venezuela's metamorphosis into a dangerous narcostate. 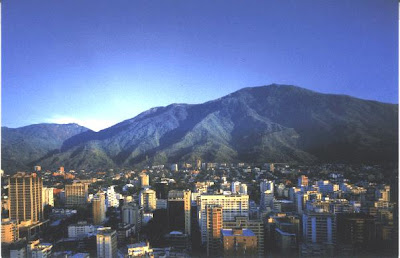