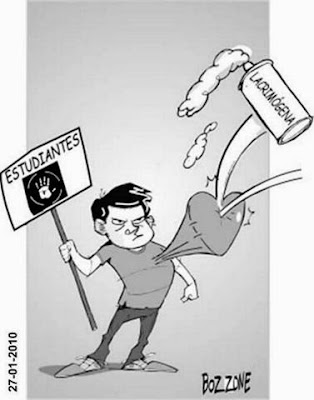 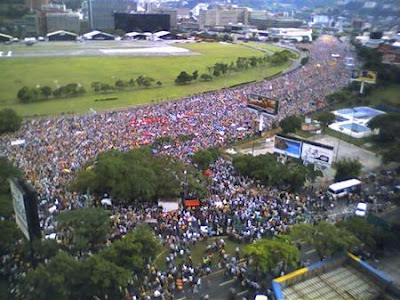 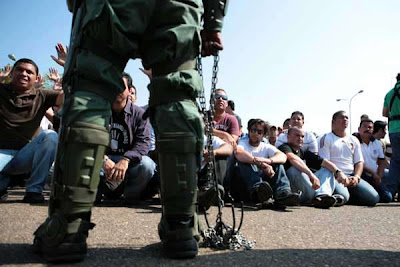 By: LeUrticant - Mérida : Venezuela - Students of Caracas to prepare protest demanding that President Hugo Chávez to respect freedom of expression, civil rights and declare an end to the violence of the state security agencies against young people. From Catholic University Andrés Bello, student leaders as well as the Central University of Venezuela, Monteavila, Santa Maria, Simón Bolívar Metropolitan said they would meet today at 11:00 am at Plaza Brion in Chacaíto to march to an undisclosed location. "We will protest peacefully, without throwing stones and not kneel before the Government. The student movement will go to the streets to denounce the truth" said Miranda Aponte, a student leader of the UMA. In three days of protests, besides the two students killed in Merida, 70 wounded were reported nationwide: 52 of them are college studentsm 11 from Santa Maria de Anzoategui, 32 in Merida, 12 of the Monteavila and UCAB 15. Roberto Patino, president of the Federation of University Centers at the USB, said: "The student movement is decoupled from the violent acts that have been evidenced in the country and appears moved by the two young men killed in Merida. She said students do not seek confrontation, but the discussion of ideas to build a country that respects civil rights and freedom. "Tomorrow we will march for freedom of expression but, above all, the cessation of violence almost warlike forces applied against students" said Patino. Students from USM in Caracas protested to demand the governor of Anzoategui Tarek William Saab, which explains the violent events recorded on Tuesday, when police entered the regional center that the university has in Barcelona and wounded with small shot seven students. Yesterday there were pockets of protest in various parts of the capital. At RCTV Internacional headquarters, opposition parties activists handed out fliers to urge civil society to uphold freedom of expression. On the boulevard of El Cafetal students of basic, middle education, and families also protested. The Metro Police attacked them with tear gas and rubber shots. Other students blocked the Cota Mil expressway. Jessica Mayora, a member of the university, reported that several young men were overcome by tear gas. http://bit.ly/9lUSuA
Publicado por Magda Mascioli Garcia No hay comentarios: